This game is as good as ever!

Sometimes classic games are just what you need to keep neurons firing and the intrigue alive. Games like 2048 take strong mathematical skills and set them on a course for creative thinking and strategic problem-solving. Sometimes, though, playing the same game can get monotonous. Go Games has resolved that issue by launching their latest take on the game, called The Incredible Tiles 2048.

While playing the game sounds easy enough, it’s not. It will take some time and practice to see just what it takes to get to that final tile that wins you victory. Now, what makes The Incredible Tiles stand out from all the other similar tile games is the introduction of different types of tiles that add a new level of complexity and challenge to the game. Version 1.1.5 offers up tiles that look like bricks, an enlarger, a spring, a teleportation device, a division sign and a multiplication sign. Come a across a brick and you will be prevented from sliding tiles across it. It literally prevents you from moving into that area.

Don’t be entirely turned off, though. Once you play a few rounds, you will easily maneuver around these so called obstacles and find a way to make them work for you, bringing you more pairs of numbers that take you closer to your destination tile. Another added bonus is that the game is loaded with several bonus prizes and an unlimited number of redos, so you can replay a level and see where you could have done better.

The Incredible Tiles 2048 provides lots of option, as well. You can choose from a classic 4×4 game square, a 5×5 and an arcade type of theme. The arcade themed game requires players to move tiles with a requested number into cell positions marked with stars, gaining you more points. You could even be invited for a challenge to get to 2048 within a stated amount of time, which could earn you an extra 50 points.

While the look and feel of the game now wears a new coat, game play remains the same. The basic 4×4 is now on what looks like a notepad of white paper, which on the surface is a new game board, but I would prefer a darker background or something with more contrast so I could see the tiles more clearly. Get past that little nuance, and this game is as good as ever with enhanced instrumentals to make the entire gaming experience a bit more interactive and raises the excitement level up a notch.

Ninflated – Blow Up Your Phone with a Floating Ninja 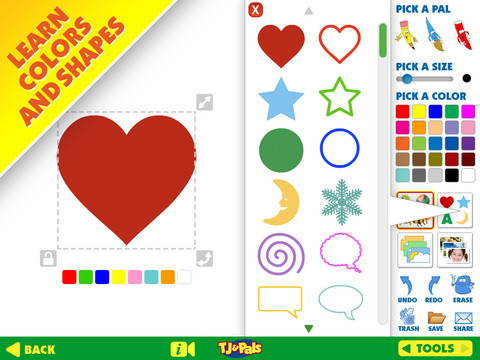 Shape the Coloring Skills of Your Kids with TJs Art Studio