You’ve never seen anything like this before. Sure there are lots of space war games out there that you can download and play to your heart’s content. But have you ever played a game that is part of an epic series of battles, each with its own challenges?

Download Epic Gravity: Episode 1 to see what I’m talking about.

This app is a 2-D space travel and explore game that has you piloting your ship through the galaxy, landing on planets, discovering new things, avoiding asteroids and taking out anything that looks like it could pose a possible threat.

The setup on the screen is like an arcade game. And while your device does not have a joystick, the app simulates joystick maneuverability using taps. On the left side of the screen, taps will move your ship as you need to while taps on the right side of the screen allow you to fire your laser and bring your ignite your thrusters.

While the app says it’s for 9+, it is fun for just about anyone at any age. Right after downloading the app, you will be taken to its main screen, which features horizontal line of buttons, numbered from 1 to 10. The music in the background it really cool, as it gets you geared up and ready to play.

Below the row of numbers is a ROAM and HELP button. Being the preparer that I am, I headed straight for the HELP button, because I wanted to know what I was in for. This unfortunately took me to the app’s website instead of a screen that was in-app.

If you want to first get a feel for how to move your spaceship around, I highly recommend the ROAM mode. It allows you to navigate freely and get used to the controls.

Once you get how your spaceship works, you can start game play my tapping on the button marked “1.” The key here is to avoid colliding with any planets, or any other object that may be floating around. If you encounter an enemy or asteroid, you can Fire at it to destroy it, before it destroys you.

It was initially a bit tricky trying to figure out mastery of the pseudo joystick controls, but once I understood that you have to use it to pivot your ship and then use the Thrust to actually move, all went well.

I have to say that the game was exciting, even though it looked very simple. I would make it a bit more interesting looking with more graphics and a Help page that better explains how to move your ship. It took several tries for me to figure it out.

I really liked how this game had you work your way through several stages and then continue the “saga” by downloading Episode 2. Something I’ve not seen in other apps and worth a look at.

Weather the Elements Armed with WeatherBug

Conduct a Poll through PeepAdvice App 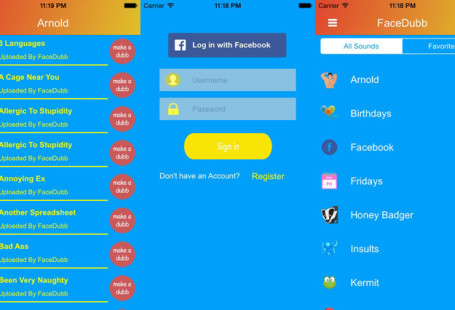